Why I play Tiny Tower

My friends are always giving me shit for playing this game called Tiny Tower. Have you ever played Tiny Tower? It’s basically a simplified Sim Tower on your iPhone, where your objective is to build flats and shops in a tower, earn money and just make that Tiny Tower taller and taller. 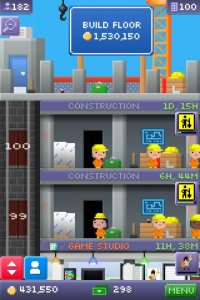 The gameplay starts off with simple addictiveness, and it doesn’t take very long to stock shops and build new floors in your tower. But after you reach 20+ floors, the time it takes to build floors just tends to get longer and longer, and the gameplay never deepens either. It’s just the same shit, but more tedious and repetitive with nothing concrete to offer you but a weak boast that you have a bigger virtual tower (read into this all you want). Most of my friends don’t last past 30-40 floors. 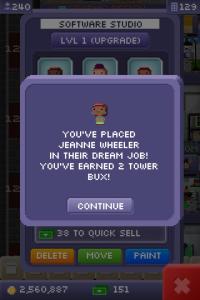 Another life made happier!

Wouldn’t it be nice to live in a place where there’s some omnipresent force actively helping you land the job of your dreams? I do realize that these are virtual people and in the grand scheme of things, their happiness won’t mean shit to the really real world. But there is still that small sense of satisfaction, and that desperate hope that if I keep doing this, karma will recognize my efforts and help me land my dream job.

Of course, I don’t even really know what my dream job is. If only things were so easy and I can just open up my own profile to check what my dream job is, and  there really was an omnipresent force trying to put me in it. Instead, the really real world has guidance counselors that don’t know shit, and recruiting firms that are only interested in meeting their quotas. Joy!

I love my kids, my wife movies and video games (in no particular order). Sometimes my dog too, but he likes to stink up my pillow these days.
View all posts by Drew »